My day has been crazy busy doing the mom thing.  I love to celebrate holidays.  Actually, I love any reason to do something special for the people I love.  Not that I need one.  I have been known to throw pancake parties in the middle of the night with full on crystal goblets filled with orange juice and french toast served on my best China for no other reason than we couldn’t sleep, but still I love the formality of a day that I get to spoil those that matter to me.  Point being, I have been busy trying to make this a special day for my kiddos to include time at their school and so I have not had much time to do anything else, BUT, I did make time to go to Starbucks.

I like for my 13 year to learn the lessons of life by example, so I kept her home this morning and she ran up to our local Starbucks to grab a cup of joe with me. 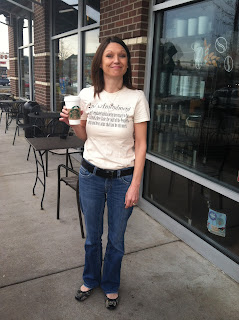 This, like most pictures of me is dorky, but hey, I didn’t have time for a photo shoot.  Being subtle is very important to me, so I opened carried, wore my 2nd Amendment shirt and a necklace made from a bullet.

Once at the counter the manager came over and asked “what us fine ladies were up to”.  I responded that we were here to support our local Starbucks.  She said, “I am good with that”  “Appreciate your business” and smiled.  Excellent!

As my daughter and I waited for our order I noticed an older gentleman checking out my backside.  I was flattered for a second, but then realized it was my Glock that caught his eye.  Here was our discussion…

Him-That is a pistol on your hip.

He looked very uncomfortable and honestly like he was afraid.  A few minutes later he started to talk to me again.

Him- Can I ask you a question?

Him- I heard that these places are gonna allow beer and wine pretty soon, would you be allowed to bring that gun in here if they do?

Me- Yes, in Virginia I would be allowed to carry my gun into a place that serves alcohol, but that might not be the case in other states, depends on their laws.  Of course, it would be irresponsible for someone to be drunk and have a gun and I am not aware of any gun owners that would behave in such an irresponsible way.

My son and his his wife went to a different Starbucks and that manager was not aware that anyone was boycotting or buycotting them. 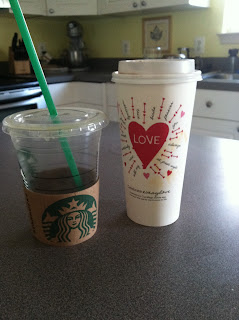 I went to 2 other locations and one also was not aware of any boycott/buycott and the other one was only aware of the buycott.  That manager had no clue that it was spurred by the anti gun people trying to strong arm them.  I am gonna call that a win for my town.

Go to Weer’d World to check out more on this subject.