The first time I bought a gun, it was just a week or so after my incident in the grocery store parking lot. I had been reading about guns and whatnot, but really was just desperate to have a firearm, so armed with nothing more than a weeks worth of internet knowledge, I met a guy I didn’t know in the parking lot of a pawn shop and handed over $550 in cash for a gun I knew nothing about.  Now, it all turned out fine, that gun has been mighty good to me and I love it, but ladies and gentleman, that is not the way to do it.

So, for those of you who are new to guns, here is how you do it and for the record, this is exactly how all the experts will tell you how to do it and I probably should have done it their way, but then I would have that cool pawn shop parking lot story…

A few months ago, I saw a video on the XDm 5.25 barrel 9mm and from that video, I decided that was the gun I wanted.  I was so excited by how excited the guy in the video was, I just knew I needed that gun, so I pretty much set out to get it.  Wait, the experts probably won’t suggest you buy a gun based on a dude in a video wetting his pants with excitement, but I am getting there.

I mentioned to a couple of people or pretty much anyone who would listen that I wanted an XDm, so being the amazingly nice folks that they are, many of them including Newbius and Girls With Guns, offered to let me shoot theirs and my lust was confirmed and it turned into a full fledged love affair.  I shot it every chance I got.

In the meantime other folks said, hey why not try this gun or that gun, of course, I did.  One gun I shot was the M&P 9mm and that one felt good too and the more I shot it the more it felt right, but I was torn because I was emotionally attached to that XDm.

John invited me out to his range and we did all kinds of drills and tests.  I shot my Glock and the XDm of a very nice guy that was there that day also and I shot John’s M&P.  Again, there wasn’t a massive difference between any of the times or accuracies, but in the end I did the best with the M&P, which should have been enough to convince me, but, I am a girl and I am emotional, so I still wanted that XDm.  Wait, the experts probably will not advise that you buy a gun based on your emotional connection to it, especially when your emotions are based on that dude in the video, but I am getting there.

One of my favorite things about my Glock is it’s lack of a manual safety(meaning something I have to do before hand to “unlock” the gun in order for me to fire my first shot) I like being able to draw and shoot.  Both the XDm and the M&P come without a manual safety, but the XDm does have a grip safety(a little “level” on the back of the grip that when you grip the handle will press into the gun and as long as your grip is right, the gun will fire.) which has never been a problem any of the times I shot the XDm.  No matter how I grabbed the gun, it shot, but some people I train with had said that as I advance in my training and do more “rolling” around onto the ground kind of work, the grip safety may become a hindrance for me.

So, I decided that I should keep shooting both guns, shoot a few other as well to include the Glock and to talk, talk, talk to people about their experiences. I went to several gun shops and gun shows and put my hands on everything I could to get a feel for what felt comfortable.  I looked at my targets and I set my emotion aside.  I looked at what I was going to use the gun for, what felt good to me, and what I was able to accomplish with said gun(ie, draw, accuracy etc.). I took my time and once I made my choice, I didn’t rush it or settle.(This is what the experts suggest) Ok, I did try to rush it a couple times, but fate intervened and kept me from jumping the gun, no pun intended.

Finally, yesterday, I went to a reputable gun store with my son and John and purchased a M&P 9mm.  Robb, the gun guy, installed Apex parts, to improve the trigger. If you are new to guns this part might not make sense, but before the trigger was kind of ratchety and the reset(the point where the trigger clicks and lets me fire again) was, not sure the right term, someone will explain this, I hope.  anyway, Robb also switched the gun over to work with my left handedness.  My Glock is made for a right handed person, so I have had to adapt.  Instead of pressing the magazine release with my thumb, I use my index finger etc.  This has not been a problem because, it is all I have ever know, however, last night as I tried to do some dry firing with my new gun, I kept trying to manipulate everything with my index finger.  I don’t think it will take long to get that under control though. 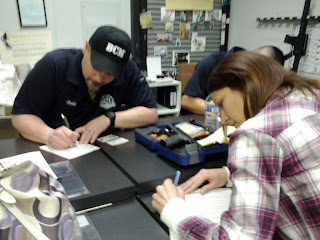 My paperwork took about 15 minutes to get approved.  For some reason this seemed to annoy the folks around me:) 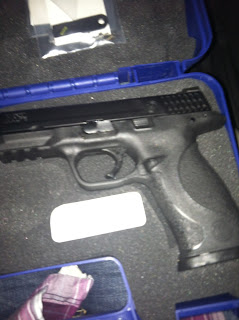 Not a great picture, but there she is…I am off to the range today to do some break in work.  I will let you know she does.