Ok, not really.  Just trying to get your attention:)

In fact, while at the range today with Newbius , he asked me how I like the XDm, that I had just finished shooting and I said I “l LOVE IT” and he said, “I think that is just your default response to any and all guns you shoot.”

Let me start at the beginning.

A few days ago Newbius left a comment on one of my posts saying he would be willing to meet up with me and let me shoot the guns he has, thinking that might help me make my choice on a new carry gun.

I got a little giddy as I read his comment and I emailed him right away.  A little back and forth and today I met him at our range.

First, let me say, I was nervous.  Why, you might ask.

Well, cuz that is what I do.  I get nervous.  What I don’t do is email people or meet people or go places by myself.  My husband has always been my safety net/buffer, so if he doesn’t email, call, text and go with me, I don’t go.

I am not shy.   I just am not assertive and I don’t make the first move.

I have been making great strides in this area, like when I got myself dressed and headed to the rescue mission for Robbie where I didn’t know a single person and without a clue of where I was going or what I was doing.

These are the intangibles that training with a gun have given me.  It’s not just that I carry a gun and know how to use it, it is the confidence that comes from facing a fear and over coming it.  There is a freedom of spirit that comes with that kind of self courage and I crave it now.

I am sure everyone here knows what I mean by that.  I certainly do not mean being reckless and disregarding the warning signs.  Fear can be a very valuable tool to alert us that something is not right and nudges us by saying lets pay attention here.  I am not talking about ignoring that.

Anyway, the time that Newbius could meet did not work for my husband, but without much thought, I knew I was going.

I am so glad I did.  He is truly a gentleman and he was very kind to me.

The guy brought 500 rounds of .45 ammo and he just let me play and play.  He gave me helpful hints and suggestions and he was very encouraging.  And even though I tried, he would not accept a penny.  That is fine by me because it just means we have to go again and next time I can pay.

Lets get to the good stuff.

Do I even have to say it…I was nervous which led me to anticipate a bit which may have led my shot to be just a b-it outside.

I actually am not an anticipator and never have been, but today I was.   Fortunately, after a few rounds, I relaxed and did much better.

I was so surprised that the recoil appeared to be less than my Glock .40.  Well, not less, but different.  I have never understood what people’s problem with the .40 caliber is until today.

Since he was trying to help me make a decision on guns, after I shot for a while, he suggested I shoot my Glock then the XDM, then the Glock and then the XDM.  Just to compare recoil and check accuracy, that kind of thing.

I have never felt a sting when shooting my Glock before.  Today my gun felt different when I shot it.  After shooting the .45, I felt more of a snap kind of recoil with my .40.  I was starting to understand what JD was saying about the difference is calibers.

He also let me shoot his wife’s 1911 and even though it was also a .45 it felt different to shoot.  It was heavier to me and I felt more of the recoil, but it didn’t bother me.  I was not accurate with this gun, at all.

I am blaming the sites.

Actually, he said one of the reasons he brought the gun was to check out the sites and he felt they were off to, so I am going to go with that. 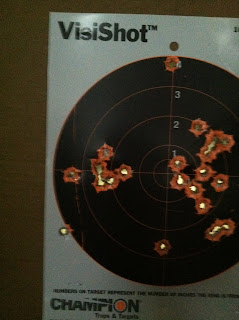 We both shot at this target with different guns and different distances. The grouping off to the left side is mine.  I was actually aiming there. I was shooting the XDm at 7 yards. 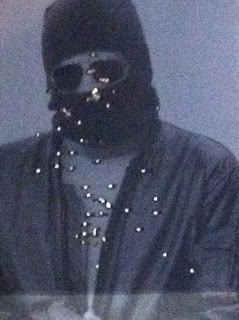 This is the bad guy target.  This is all 3 guns at different distances too, but I was pretty impressed with this over all.  I shot with 2 guns I had never shot before using a caliber I had never shot and he had me do a lot of different things, like a rapid fire of an entire magazine.  Every single shot was on the bad guy.  Not one outside the body.  I did shoot his arm once, but hey, I was trying to get the gun out of his hand before I blew his head off.  I like to challenge myself a little.

One of the neatest things we did was shoot a paper plate.  I had never done that and that was cool.  Newbius said it is a great target to use with new shooters because they don’t have the fear that comes with shooting something that looks like a person or the stress of trying to hit the bulls eye.  If they hit the plate at all, they feel  successful, which, of course they are.

Heck, I think if you can get them to the range and they shoot the gun even if they don’t hit anything, that is a success and a very big step in the right direction.

I loved the plate so much I kept it. I will absolutely use that strategy the next time I take a new shooter to the range.

The other thing I did for the first time was shoot at 25 yards.

Not, so good and I can’t even blame the sites.  It was just hard for me to see.  He stood behind me and said 9’oclock, or just outside the circle.  I tried to make that compensation even though I couldn’t see, but lets just say, significant work needs to be made in this area.

Can not ask for a better day!!

Thank you so much Newbius!  You are awesome!!

12 thoughts on “After My Day At The Range, I Am DONE With Guns!”