I have been working out with a lady every Tuesday and Thursday since March.  We have enjoyed our time together so much, we started meeting at the gym on other days too and then hanging out sometimes over at my house with the fam.  We have a lot of fun together and share a lot in common.

One day I suggested she come to the range with me.  She said she wold love to, but had never even held a gun before.  I said no biggie I can show you. We spent several conversations discsusing guns and safety and about a week before we headed to the range, she came to my house for a little safety lesson.

I had the guns unloaded, action open(slide locked back into place), and ready to go when she got to the house. First we refreshed all the safety rules then I showed her how to clear a weapon and then let her hold them and get used to how they felt.  She picked up the guns, checked them to be sure they were empty(even though she knew they were), then did a bit of dry firing and practiced looking through the sites.  We talked and handled the guns for a few hours then cleaned up and ate.

On the day we planned to go to the range, we got up early, headed to the gym, got in a good work, and then I came home to shower.  In the middle of my shower all of a sudden I panicked!!!

“I am not skilled or experienced enough to teach anyone how to shoot”?

I was freaking out.

Tried to get my husband or son to go with us, but they couldn’t.

Since no one could go with us, I just took a deep breath, reminded myself I can shoot, I had taught her what to do to be safe, and that we were going to a good range with qualified folks right there if we needed anything.

I did not want to freak her out, so I did my best to hide my concerns.

On the way there, I went over safety rules again and the range rules and gave a few helpful hints.

My plan was to let her shoot my daughter’s .22(small riffle), but our daughter has yet to shoot it and my husband didn’t want someone else to shoot it first.  So, I thought I would rent her one and maybe a 9 mm(handgun that shoot 9mm bullets), because it had less of a kick and I have read so much about woman not liking the kick of a .40.  I had read so much about the kick ruining shooting for woman and I did not want to ruin shooting for her.

I thought about it and though about it, but the more nervous I got, the more I decided to keep it simple and not have several guns with different ammo to confuse her or distract me.  I decided, I started on the .40, so surly she can.

We got the range, got set up.

I shot a few magazines first and then she stepped up. 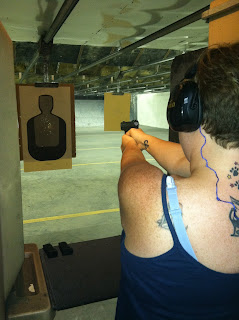 She picked up the Glock, kept her finger off the trigger and kept it pointed down range.

She aimed, took a few deep breaths and shot. 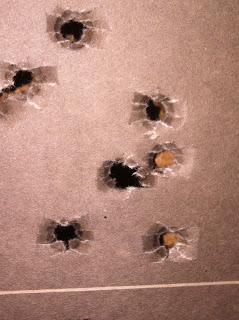 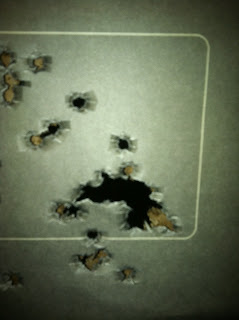 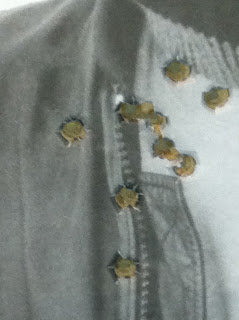 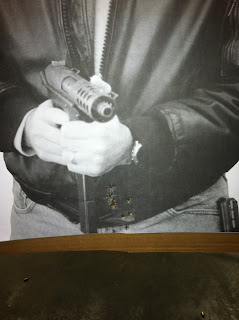 Last magazine
Looks like I had nothing to worry about.  I taught her everything I had been taught and she listened, perfectly!
I asked her about the kick of the gun and if she would have preferred to have started with something that either didn’t kick at all or had less of one.
She said since she had never shot anything before, she didn’t know what to expect, so that kick was normal.  She felt like, had she started out on something smaller and then stepped up to the .40, the .40 probably would have scarred her more.
I had never told her my experience, but that is exactly how I felt.  When I shot for the first time, it was my Glock and it was my only reference.  I didn’t even know that other guns didn’t act exactly like my Glock.  I wasn’t turned off by the kick because I didn’t realize there was another option.
So, the trip was a success!!  Everyone was safe, she did great and had fun!!!
I think she will be back!!

5 thoughts on “One More To Add To The Fold”