Friday night my husband’s company had their annual Christmas party. I didn’t really want to go. My favorite people were not able to attend and even though I love date night with TSM with our schedules I enjoy spending my “free” nights at home with the kiddos.

Be that as it may, we were going so we got all dolled up. 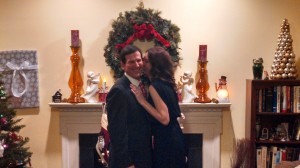 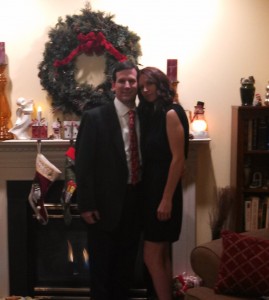 Both of these pics are out takes.  I liked these better than the posed ones. After pics we headed out for the evening.

The gathering was small, but nice. For dinner we sat with a gentleman that works in my husband’s office. Very nice guy. He wasn’t much of a gun guy until he came to work in the office my husband opened. Now, he is quite a fan. He just started skeet shooting. I enjoyed listening to him tell of his new adventure. He was almost giddy. There was another man, his wife and their 14 year old daughter also at our table. The man of that group used to work with my husband when they were both Marines many moons ago on Camp Pendleton. We reminisced about life on the base and the good ol days. His wife is a sweet, sweet woman and quite patriotic. She wishes she could do life all over again and be in the military herself. She is new to shooting, but has the bug pretty bad. Their daughter doesn’t shoot yet, but her mindset is solid.  After chatting with her, I am confident she is not of the girls should be “nice” and “polite” crowd. She was very nice and polite at dinner however.

Had a very nice conversation with my husband’s boss. Not for the Internet, but a good “in person” story.

Saturday I ran on the ambulance. TSM stayed with the kiddos. Nothing to exciting, but several patient contacts. I did have a run in with some firefighters.

The driver of the ambulance decided we needed to wash our rig. After he decided we all needed to wash our POV’s. He told me to pull my truck around and park it next to everyone else’s, so I did. About the time someone slathers soap all over Jayne, the fire truck pulls by, but I am blocking the bay and he has to go around and back in. He does, then jumps out and starts yelling. He isn’t yelling at me. He is yelling at the driver of the ambulance. They go back and forth and I try to apologize, but no one is listening. Someone tells me it’s no big deal they are fine. They settle and start chatting about this and that. I am off cleaning something else when I hear this guy say, who’s truck is that anyway. They point to me…hers.

YK- You done washing it?

YK- You gonna wash my Chevy?

Me- Probably should since I blocked your bay.

YK- Hell no. Your not gonna wash my truck. You didn’t think I was really mad did you?

Me- Seemed like. (I did think he was mad, but I was not the least bit concerned or worried about it)

YK- Naw, that’s just how we talk around here.

So, “Hey you stupid motherfucker what the hell blocking my bay.” While slamming the doors and throwing turn out gear is just another way to say “Good morning” at the firehouse.

Sunday was a pretty low key day. Tons of kiddo time. Went grocery shopping with M, played games with the younger ones, did laundry(TSM actually does all the laundry), cooked a killer dinner and even got to sit down for 30 minutes or so and catch the last half of the Redskins game. 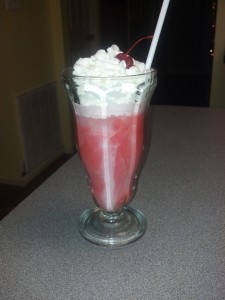 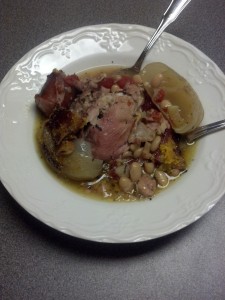 My version of a cassoulet. Chicken thighs, beans, smoked sausage, onions and bacon slowly braised for hours. The typical cassoulet is a 3 day process, but I do not have time, so I adopted a jambalaya recipe a friend sent me the other day and the results were spectacular.

I start back to work at the range in January. Some exciting things on the schedule. Once everything gets finalized I will let you all know. Not to jinx it, but also in January it looks like I will be able to start back training with Arete. Homeschooling is going well. Another post on that later. Tonight I am making a very special meal for M. That will be the subject of tomorrow’s ramblings. Other than that, not much going on.

18 thoughts on “Playing Catch Up”