Oh my gosh where to start…The range that I train at and now work at is about an hour from my house, so Saturday morning I got up at 4:30am to leave by 5:30 to be at the range by 7:00.  I know I said an hours drive, but I did not want to be late.  I actually had a moment of panic because in all the times I have been to this place, I have never driven and I have never paid attention on how to get there.  It’s a bit remote and I didn’t want to rely on my GPS, so I  asked my husband to give me a brief directional refresher, but the Marine in him came out…a full recon exercise ensued.  He mapped it on the computer and showed me, he got out the actual map and traced the route with a pen, and he wrote me directions to include a map he drew, so there was pretty much no way I was getting lost. He takes good care of me.

My purpose for the weekend was mostly to attend the training, but also to do some work.  I got to put up targets, lots of targets.  For some reason I put up 8 targets with the plain white side facing out and the bad guy skeleton flat against the cardboard.  Not a very impressive first run out of the gate, but it is what it is.  I also got to hook-up a student with a loaner gun and gear for the weekend as he did not have his own.  I took pictures, I picked up lots of brass(so did everyone else), I picked up wet soggy, muddy trash left by the side of the road.  Pretty much anything John needed.  The class was small and as with every single training I have ever attended the people who I shot with were phenomenal.  They knew I was new and in training and they were extremely gracious as to let me work the line a little.  I did not do any actual instructing, of course, but John was there and he let me call a few cease fires and little things like that.

Being in an environment with all men for 2 days is interesting.  Sunday morning we are all standing around chit chatting waiting for 9:00am when we could start shooting and the guys are telling colorful, dirty jokes and cussing like sailors when I hear John yell “Hey, Bob(not his real name), say good morning to AGirl.”  I turn around and he is peeing.  He waves to me and I wave back.  I tell him it was good to see him again..all of him.  I then ask John when the sexual harassment brief will be starting and he said “You just had it.”  I turned around with a big ‘ol smile on my face, started loading my magazines and said, “My life is so different.”  It was fun being one of the “guys”.  I have never been one before.  Being men, gentleman really, some of them had a hard time not being gentlemen.  John asked me to grab a table from the classroom and bring it to him.  As I stood up, so did several of the guys and as I walked back with the table, one very nice man asked if he could help me.  I said “No, thank you. I have it”  I think it was wonderful that he asked(I teach my sons to do the same thing and my husband would have asked too) and if I was not working I probably would have said, Yes, thank you, but I wanted John to know he could count on me to actually work and plus, it was kind of cool to have a bunch of men sitting around doing nothing while I did some heavy(it wasn’t really heavy) lifting. It’s neat being a chic in a man’s world. Of course, these are cool men.  It would have sucked if they were assholes.

As for training this is what we did…we shot a lot from 25 yards.  This I hate.  I stink so bad.  There are no words to describe how bad I stink.  When I first starting shooting from 25 yards a few months ago I could not even hit a paper plate sized target.  Before this weekend I was able to do that, but that was it.  Could not hit where I was aiming to save my life, literally.  Saturday was the same way.  I hit the target, but there was no group to be found. 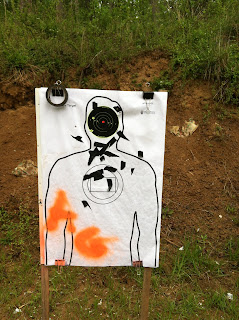 You can see I mostly hit the dude, but it was ugly. A bullet here and one way over there and perhaps a few straight into the berm.  Good stuff.  However, by Sunday I was able to hit kind of a group to the head area and I was thrilled.

I also hit the steel plates from 50 yards.  3 shots standing, 3 shots kneeling and 3 shots in the prone.  There were 2 other shooters shooting at the same time as me, so I couldn’t tell if I hit anything, but assumed I hadn’t, until the guys told me I most certainly did, at least 3 times.  That was a win in my book as I have never even attempted to shoot anything from 50 yards.  I was shooting my Smith & Wesson M&P full size 9mm gun the whole weekend.

We rotated between drills that were close and fast and drills that were long and slow.  Lots and lots of scenario based shooting.  I love this abut John’s classes.  The have context.  Shooting to shoot is awesome and I love that, but for me adding the real life thinking process to it is really why I train.  So, we shot single moving targets and double moving targets.  Shooting a target while they are moving and you are moving, in the rain and mud is not as easy as one might think.  My first time through was not so great.  I had a lovely tight group, but unfortunately my group completely missed the bad guy.  Solid white.  I was not leading the shot.  I missed partly because its just hard to do and partly because John was yelling at me to NOT. CROSS. MY. LEGS as I moved.  The second time through I got several good hits on bad guy one and even more on bad guy 2.  Seriously, who does not think that sounds like crazy fun??!!

We shot scenarios where there were multiply assailants.  First time through we moved from left to right and I have to say I rocked that drill.  I was fast and accurate as all get it out.  Second time through, awesome! The third time we reversed the order and went from right to left.  This time I drew and had a dead on hit, but I backed up into the bad guy that was flanking me.  Not good. Would have been toast.

We shot drills from high cover, medium cover and low cover.  We shot simulating shooting a guy in the leg from under a car.  We actually shot a can of paint.  So fun.  I loved it because I shot twice then needed to change my magazine, so I rolled back behind the cover, reloaded and rolled back, right on target and shot a few more times.  Did I mention I had fun?

When it is time to top off magazines one thing we do is an admin reload.  I know most people probably know what this is, but for the newbies, I will explain. An admin reload is where you leave your gun holstered, but pop out the magazine and insert a new fully loaded mag.  That way you start the next drill completely ready to go.  I have been doing these since the first class I took with John a year ago.  Remember that complacency 45er was talking about.  Yep, I did an admin reload and forgot to insert a magazine, so first time up, I get off one well placed shot and then click.  No problem tap…nothing to tap.  Fine, I grab a mag from my right hip load, rack and shoot.  Dang that sucks, but I moved and handled the problem so good for me.  What was not so good was about an hour later, I did it again.  I shot one great shot, click. I realize this time right away I did it again. I am PISSED, so I reload and then pretty much unleashed my magazine on the guy.  When I get done John asks if I felt better and I did.  A little brag, every singe shot was dead on.  I was pissed, but I was controlled. No issues getting back on target between shots.

I had some equipment trouble.  I have a very high grip on the gun, but on my M&P the left sided slide release messes with my grip.  I tried adjusting to compensate, but I have been griping that way so long and am accurate with it that changing just isn’t an option. I am going to have that release removed.  My belt/ holster combo was not good either and it really effected my time.  I could not get under 2 seconds on the clock, but it was easy to see that my belt was too loose and there for it took more effort to get my gun out of the holster.  I am too tiny to get that belt tight enough.  I can fix that problem with minor adjustments and that should improve my time.  Oh, if you are new that means I stand there, John says something like, “He don’t look right.” I say “Stop, get back” or something to that effect, when I hear a beep, I draw and take 3 shots.  The beep is from a timer. He is timing the first shot to see how fast I or we can draw and get my/our first hit, with accuracy hopefully.  Everyone else made it under the 2 second mark.  It was pretty cool to see their times improve.

I could go on for another 100 paragraphs, but I won’t do that to you.  We did several other drills, watched some videos, did some classroom discussing and spent time getting to know each other.  My first goal was to learn.  I want to shoot better, faster, straighter and I want to change the way I think.  I don’t want to stop crossing my legs, but apparently that is not an option.  Secondly, I wanted to represent FPF Training well and thirdly I wanted to represent female shooters well.  I was by no means the best shooter there, but I think I held my own against the men. I pray that at least some of the men there left with a positive view of women shooters(not that they had a negative one to begin with)and hopefully I did not embarrass our gender(talking to the girls here:) in anyway.  Also, in case I forgot to mention it…I HAD A BLAST!

23 thoughts on “My Weekend”