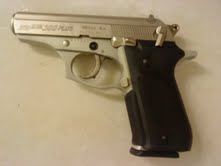 When I was a young teenager, I was aware that my father had a gun in the house for our protection and also one for his job. It wasn’t something that was shocking to me or particularly interesting at first. But few years back, my father was an armed security officer for our county’s federal courthouse (just a stone’s throw from the police station). There are a few night clubs in the near area as well. He worked a graveyard shift and noticed a young woman outside walking past the building and soon after a man walking very fast behind her. Alerted, he went out to investigate and around the corner heard a yelp.

The man had grabbed the woman and yanked her over the bushes in an empty parking lot, got her on the ground and began unbuttoning his pants. My father pulled out his gun, told the man to stop, the woman ran and clung to him and the perp froze for a second.

Unfortunately, my father could not shoot because his own life was not in danger, nor was the woman’s any longer. Realizing this, the man ran off before my father could arrest him.

When he told me that story, I couldn’t help but think “How lucky could to have someone with a gun around to save her!” But the more I got to thinking, the more I realized: How much better would her odds have been had she had a gun in case there was NO ONE around to save her? It was something my father made sure his daughters knew about the world: it can and WILL happen to anyone and we need to be aware of our surroundings.

I took it a step further and this year in April received my CCW permit, and my father bought my hubby and me a handgun as our wedding gift (per my request). And now I’M OBSESSED with learning about them and conceal carry! LOL! I’ll be purchasing my second hopefully this month. (a Kimber 1911)*

3 thoughts on “Woman With A Gun- Melinda Mercier”