Last night I went to a meeting held by an organization that is very active in preserving and fighting for the rights of gun owners in my state.

I loved every minute of it.

I may be in some kind of honeymoon state, that might wear off soon, but I sure hope not because I am having way too much fun.

The meeting was pretty basic, the president called it to order, gave a brief overview of the evening, then turned it over to someone else.

Elections are coming up, so a few candidates spoke.  None from my district, but I was still encouraged by the things they said they stood for.  All of them spoke about fighting actively for the Castle Doctrine and that made me very happy.

I would say there is no real way to know if they mean what they say, but I think this group is pretty thorough in vetting those they stand behind.

Then a gentleman spoke about his youth rifle shooting team.

I absolutely loved seeing these kids!!  They were being taught about so much more than guns, but let’s face it, the gun part was way cool.  Not a cheap sport to get into though.

Money aside, I think my 8 year old would love to get involved in something like this someday.

Unfortunately, being the mother of 5, I had kid drama mid-evening.  Phone calls to my husband and text messages to me and well, we left the meeting earlier than we had hoped to head back to Shangri-La where I dawned my referee suit and settle a whole host of issues.

We drove a little over an hour to the meeting and one of the guys joked, “That is a long drive.  These meetings are not that exciting.”

Let me take you back to the beginning.  Pre-teenage drama.

As luck would have it, there was zero traffic and we arrived in a timely manner, so we beat the people we were suppose to meet.

We went into the coffee shop, ordered our iced soy lattes(no judging) and waited.  Ok, I waited and my man went to the little boys room.  But if he asks, it was the big boys room.

As I waited, 2 gentlemen came in, open carrying, and walked up to the counter to order.

The young kid making my coffee, looked at me and said “oh boy, here we go, guns.”

He looked me up and down and was completely perplexed.

I was also open carrying and can only assume that I looked so not like a gun person he did not notice the Glock 27 on my hip. 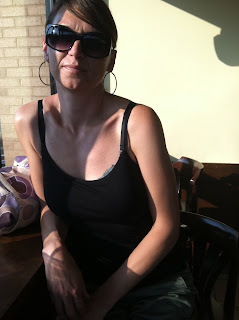 I turned so he could see my gun and he just shook his head and said “Oh, no.”

He said, “If a bad guy comes in, will you still protect me?”

I said, “Of course, yes, absolutely.”

A few minutes goes by, he looks at me, laughs and says, “What are the odds?”

I giggled, smiled, grabbed my coffee and went to find a seat.

I love this because even though I did nothing, I think I might have, inadvertently, helped this kid see that people with guns are not so scary.

If you have read this blog very long then you know I am a big fan of conceal carry, but I am starting to see the positive side to, every once in a while, leaving my Glock out for all the world to see.

I met some very nice people, learned some interesting things about people who hope to be involved in running my state, drank some killer coffee, possibly helped break a stereotype, and all this before 10pm and in 100 degree heat.

All in all, a fine way to spend a few hours.

6 thoughts on “A Fun Night Out”