As I said in yesterday’s post, I went to a gun show on Saturday.   John, my man and I met up and began our pilgrimage.  We only made it about 3 tables in when I decided I would be making an impulse buy.  I have discovered that I love old guns.  I love their history, I love their feel and I love their look: the beat up, I have been used, I have a story to tell sheen. No surprise then that the Mosin Nagant would catch my eye.  Once John started to tell me about them, I was hooked.  John has a system where he likes to go up and down the aisles and take mental notes of the things that interest him and then return to the booth that had the best price.  My man and I have no system whatsoever.  We wonder aimlessly, eating beef jerky and hoping we don’t get screwed.  John’s plan seemed better, so we went along with it.  The problem being, I really could not focus.  I just kept thinking about that Mosin.  We had made good progress and learned a ton of useful info plus had purchased a flashlight, some beef jerky and ran into friends I had not seen in a while.  I was thoroughly enjoying myself, but getting quite antsy.  About half way through I exclaimed, “I want that gun”.  My man said “Go for it” and John said, then “then lets do it.”  We all high tailed it back to the booth which turned out to be perfect timing.  There were 3 in the box and within 2 seconds of us picking one up, the others had vanished.  I think it was a God thing.  Now, I really wanted to buy this gun for myself, but I had left my drivers license and Conceal Carry permit in my range bag back home(I was not carrying or driving, so no laws were broken), so that fine man of mine offered to fill out the paperwork and jump through the hoops to bring that beauty home.

The Mosin Nagant is a rather larger gun and I got a good deal of attention carrying it through the expo center.  Many a folks stopped us to chit about it or ask questions.  As we were leaving one guy said,

His friend said, “I am not coming onto your property”.

I walked on by with a big ol” smile and a bit of a spring in my step.

I spent much of that evening caressing her and squealing like, well, a girl.  I tried to get my husband to let me sleep with it, but he said, nope.  He had done enough of that in the Corps.  Truth be told, I think I could have convinced him, but, it’s probably not a good habit to get into.

Since I am spoiled and blessed beyond belief, I did not have to wait long to shoot her.  Yesterday that man of mine and our son met John and a few of his friends at the range.  I have to mention here that this has been a very mild winter in Virginia.  No snow to speak of and pretty much the temps have been hanging out around 55-60 degrees.  However, on Sunday, we woke up to windy, bitterly cold temps of around 29   degrees.  At this point I would like to state all the training in real world conditions crap that Duke and Stephen were espousing last week…HIGHLY overrated. Don’t do it.  Stick to paper targets at indoor ranges with heaters and RSO’s that serve you steaming hot cups of coffee in between magazine changes.

I wore long john type pants under my famous black jeans, 2 pairs of socks, boots, a t-shirt, a long sleeve shirt, a hoodie and my large winter coat, plus a scarf and gloves and I was still a Popsicle.  Mostly just my hands.  The gloves were not helpful, plus to shoot I took them off.  Cold is not my friend, but it did eventual warm up to temperatures that were bearable.

You all know how I feel about gunnie’s.  Smart, kind, generous, funny…  Well the people John brought to the range on Sunday were no exception.  I did ask if I could share pictures, but I forgot to ask if I could share names, so we will just call them Mr. & Mrs. Awesome.  There was one other gentleman there, but he did not stay long, so unfortunately, I didn’t get to know him.  Mr. Awesome had a 1911 and an AR 15 chambered in. 6.8 or 6.5 (I think, I can’t remember.  It was a new caliber for me and so much to learn) Mrs. Awesome had a 9mm S&W M&P and an AR 15 chambered in the more common .223.  Because they are awesome they let me shoot their guns. I think I was still getting ready to take the shot in these pictures, but… 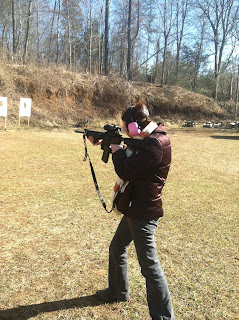 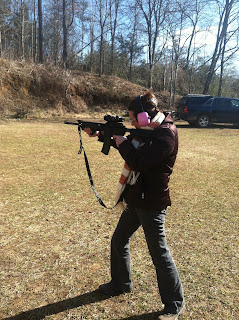 My husband and son thought Mrs. Awesome’s AR was the best set up they had ever shot.  I am still getting to know guns and don’t have a feel for all the little intricacies, so I liked them both the same.  Mr. Awesome’s was heavier, but it felt more comfortable in my hand.  I believe hers was shorter(I don’t know if it was a carbine, but it was smaller in length than her husband’s) and I am tall drink of water, so that might have been why.

And, of course, we all shot the Mosin Nagant.  I was a little nervous to shoot her.  Not butterflies in my stomach nervous, just a little curious as to how it would feel.  A young kid at the gun show told me he had shot about 15 rounds out of his and woke up to a black and blue shoulder and John said the Nagant kicks about 1/3 more than the Garand, so I wondered if I would be in pain. 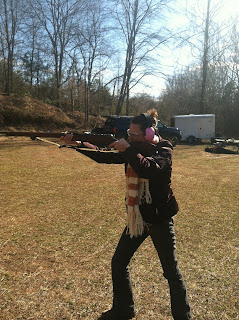 I did not think the kick was a big deal at all.  This is going to come as a huge shock to everyone.  You may want to sit down for this revelation, but I discovered while I love the look of this gun, shooting it was, well, FLIPPIN AMAZING!!!  I LOVED IT!!  Oh, my, oh my, oh my, it was pure bliss.  I shot about 20 rounds yesterday and enjoyed every single one.  I did wake up this morning with some slight soreness in my left shoulder,  It feels like when I up my weights on the fly machine at the gym.  I am not black and blue which kinds of bums me out.  I was hoping to show you all how tough I am. 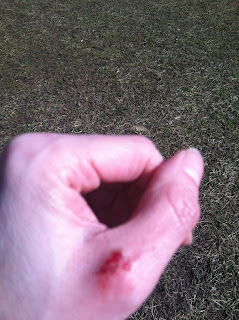 Although my shoulder is fine, I did take several good hunks of flesh out of my thumb working the bolt action.  I am left handed, so my left hand sits on the butt stock(not sure what it is called) , so when I pull the bold back it very nicely slides right over my thumb, taking a piece of me with it.  I am gonna have to practice and find a new way to work the action. 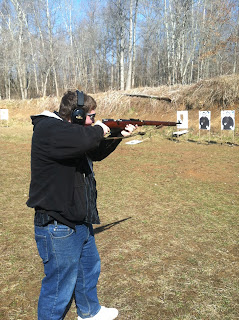 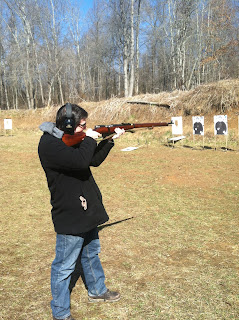 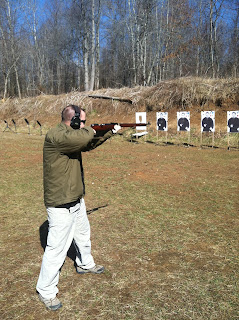 A few last notes…if you don’t understand the title of my last two posts, go here.  Also, I was informed that rifles are girls and they must be named.  I was not aware of this, but who am I to buck the system.  I am going to steal my friend Lynne’s idea and ask for help from all of you.  Please give me your suggestion for what her name should be and if I decide to use the name you suggested, I will send you this as a little thank you.